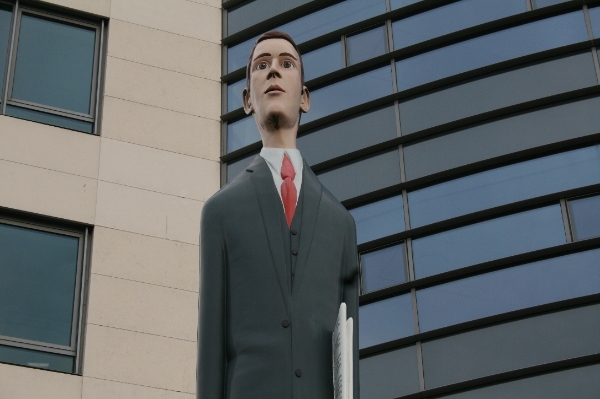 Only half a kilometre east of Luxembourg’s city centre, you’ll find the Kirchberg Plateau known for being a major business hub and financial district. However, besides the usual signs of prosperous corporate culture, Kirchberg has much more to offer.

After wandering about from across the plateau, it doesn’t take long before you discover many urban artworks and sculptures spread out in the area that are in fact Kirchberg’s best kept secrets.

The collection of modern art and urban sculptures seems to blend in perfectly, complementing an area rife in modern architecture and imposing glass buildings.

Less popular than Luxembourg City’s more central hot spots, Kirchberg’s artsy and creative profile is undoubtedly worth exploring, reflecting in fact the fast pace at which Luxembourg has embraced innovation and progress throughout the 20th century.

On a sunny day, taking a stroll in the area should give visitors the perfect chance to enjoy Kirchberg’s green scenery as well as the modern art and architecture in the area.

If you are truly looking for an adventure get ready to explore a city within the city, and be prepared to spend a whole afternoon on a walking tour of Kirchberg’s streets and parks.

Start the journey on Boulevard Konrad Adenauer by the European Investment Bank (where bus no.18 stops) and spend some time exploring Magdalena Jetelová’s gigantic chair sculpture.

Known as the ”Stuhl”, this gigantic dark-coloured chair has been on display since 2000 and features rough wooden textures that express vitality and strength. The roughness and simplicity of the ”Stuhl” stands out boldly, contrasting with some of the European Union’s coloured glass and steel buildings of Luxembourg.

Relatively close to the ”Stuhl” are ”Kopf” and ”Non Violence” in front of the European Commission’s Jean Monet building.

Jeannot Bewing’s ”Kopf” is a rust-encrusted steel sculpture and portrays the contours of a head through two interwoven angular steel elements. Also called ”Mim” by the artist himself after his life companion, it is an example of contemporary art produced by a local artist whose life has been strongly influenced by the heavy industry dominant in the south of Luxembourg.

As you walk beside the building, your attention will be immediately drawn into an extraordinary piece of art.

Created by Swedish artist Carl Fredrik Reuterswärd, ”Non Violence” represents a symbolic, yet meaningful attitude towards violence and crime. Outraged by the murder of his close friend John Lennon in 1980, Reuterswärd produced a sculpture that promotes tolerance and peace. While the original artwork was bought by Luxembourg’s government and offered to the United Nations headquarters in New York, where it currently lies on display since 1988, the smaller bronze duplicate of a 45 caliber handgun in Kirchberg remains one of the few ”Non Violence” originals in the world.

Continue strolling down Rue Alcide de Gasperi and make your way to Kirchberg’s Central Park that includes the largest green space in the area, where a number of urban artworks and sculptures are waiting to be discovered.

The park’s highlight and major art attraction has to be the ”Trois Iles” created by Hungarian artist Marta Pan. Three individual elements, interlocking triangular shapes of stainless steel form on the surface of the water, are a floating ensemble of three islands. Discover a multifaceted piece of urban art, formed by a water and a park landscape, which constantly varies according to the position of the observer.

In the vicinity of the three floating islands, stands ”L’Africaine”, a sculpture by Lucien Wercollier, one of the most important protagonists in contemporary Luxembourg-made art. A devoted promoter of the ‘plump’ form in most of his works, Wercollier excels his very own vision by creating ‘‘L’Africaine’’, a bronze sculpture depicting the curvaceous portrayal of an African woman. 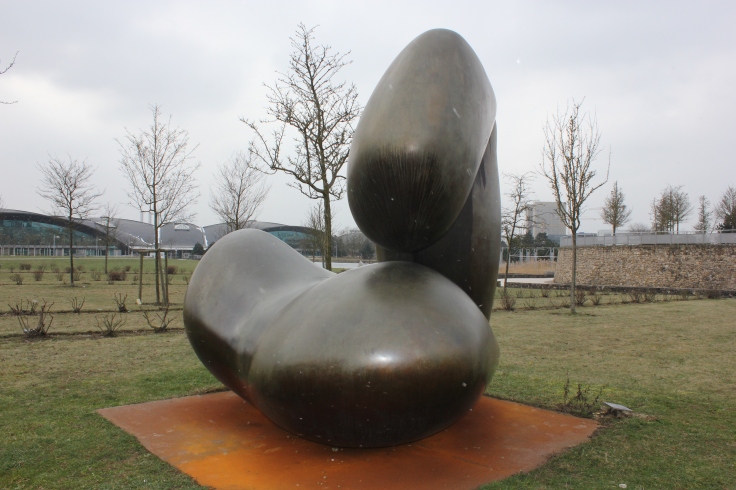 Just a few metres away, the Central Park is home to several contemporary artworks that stand in contrast to the more classical and rigorous pieces of art in the area. For a change, make sure you explore a piece of art consisting of a caravan that stands a few metres high on a thick block of bricks.

Once you reached ”L’Africaine”, note that there are a few options for you to choose from in order to proceed with the tour.

If you like, you can continue walking in the park and enjoy Kirchberg’s green landscape until you reach the other end of Central Park, the place where several other sculptures are on display.

Alternatively, you can take the bus from Boulevard Konrad Adenauer or Avenue John F. Kennedy to get to Rue Alphonse Weicher, one of the streets in the proximity of Kirchberg’s shopping centre.

Once in the area, make sure you see ”Clitunno” by Markus Lüpertz, as well as the ”Sarreguemines”, a fissured steel sculpture by New York-based artist Frank Stella.

Markus Lüpertz’s work was inspired by ”Fonti di Clitunno”, a source of inspiration for many classic creators of antiquity and provides a modern perspective on the subject.

In creating the ”Sarreguemines” the American artist was inspired by the intertwined paths of floating smoke-rings, reflected in the dynamic spiraling form of the sculpture. Frank Stella’s artwork stands in front of one of the University of Luxembourg buildings on rue Alphonse Weicker.

Continue reading about the tour of Kirchberg’s sculpture secrets here.

An article published on the English Wort on February 25 2013.